An asexual person (“ace”, for short) is simply someone who does not experience sexual attraction.  That’s all there is to it.

Many people hear the word asexual and make their own assumptions about it. They think of single-celled organisms in a petri dish.  They think of a celibate monk on far off mountain top.  They think of a genderless robot from outer space.  Asexuality isn’t any of those things. Let’s debunk some of the commonly held Asexuality myths.

Myth: Asexuality is the same as celibacy

Asexuality describes someone’s sexual orientation, that is, that they do not experience sexual attraction to anyone.  Celibacy describes someone’s behavior, that is, that they do not have sex with anyone.  Orientation is not behavior; attraction is not action.  Celibacy and asexuality are neither mutually exclusive nor mutually linked.  It is possible for an asexual person to not have sex and be celibate, and it’s also possible for an asexual to have sex and not be celibate.

Myth: Asexuality is a choice

Asexuality is not a choice.  It is a sexual orientation, like heterosexuality or homosexuality, and like those orientations, it cannot be turned on or off on a whim. Everyone needs to understand that it’s what the person naturally is, and that It cannot be altered.

Many asexuals can feel the full range of romantic emotions, from a slight crush to true love.  It’s just devoid of a sexual component.  Asexuals are not limited to platonic love, either.  When an ace feels love, it can be every bit as complex and deep as the romantic love that anyone else feels.

Most asexual people can have sex, and some of them do. Asexuality is the lack of sexual attraction, not a lack of sexual ability.  Asexuals are physically and physiologically indistinguishable from other people, in other words, in most cases, the equipment is all there and in working order.  If an asexual person is incapable of having sex, it is usually due to some other condition, and not necessarily related to their asexuality.

Being intersex is completely unrelated to asexuality.  The various conditions grouped under the umbrella of “intersex” are all physical conditions.  Asexuality is not physical.  However, it is possible for an intersex person to be asexual.

(By the way, the word “hermaphrodite” is generally considered offensive, so don’t say that.)

Myth: Asexuality is the same as being a transsexual or transgender.

Asexuality is not a gender identity issue.  Most aces are cis-gendered, but some are trans, others are agendered, gender fluid, or what have you.  Asexuality only describes who someone is sexually attracted to (namely, no one), and has nothing to do with the gender they are.

Myth: Asexuals all hate sex and everyone who has sex.

Asexuality should not be confused with antisexuality.  Most asexuals have no problem with sex.  Some don’t like the idea of sex when it comes to themselves, but are typically indifferent when it comes to other people.  Some even enjoy having sex.  Asexuality is merely a sexual orientation; it doesn’t have any effect one’s opinion on sexual activity.

If you want to know if someone else is asexual, you have to talk to them about it.  There are no outward signs of asexuality, and you shouldn’t attempt to label someone else against their will. Judging is never the cure. 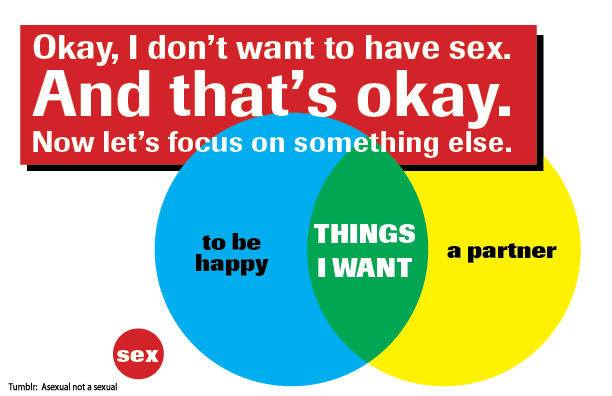