In 2011, the United Nations High Commissioner for Human Rights, Navanethem Pillay, said that while racism, xenophobia and sexism have been condemned by many countries, issues like “transphobia are too often overlooked.” – This is true, particularly for our country- India.

The Rights of Transgender Persons Bill, 2014, piloted by Tiruchi Siva, MP, was introduced in the RS on December 10, 2014. MPs across party lines discussed the bill in detail and rallied for its passage. This proved to be a game-changer leading to the RS passing a private member’s bill for the first time in the last 46 years. However, there was an unanticipated delay in discussing the bill in the Lok Sabha. 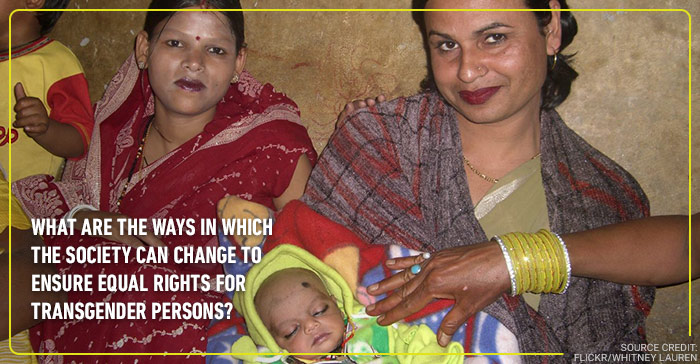 It was introduced in Lok Sabha on August 2, 2016 by the Minister for Social Justice and Empowerment, Mr. Thaawarchand Gehlot.

The Bill defines a transgender person as one who is

Part 3 of the Indian Constitution gives us ‘Fundamental Rights’ and Article 14 prohibits discrimination based on sex, caste, religion, race or place of birth.

The bill shall ensure non discrimination by taking following steps-

The Committee will comprise:

(i) the Chief Medical Officer;

(iii) a psychologist or psychiatrist;

(iv) a representative of the transgender community; and

(v) an officer of the relevant government.

Special provisions shall be taken by the relevant government to ensure the full inclusion and participation of transgender persons in the society which includes – rehabilitation, vocational training and self employment and create schemes for the welfare and to promote active participation in cultural activities.

Setting up of National Council for Transgender persons (NCT) and shall act as a consultation body for formulating legislations and laws:

Members of the Council-

(iii) Secretary of the Ministry of Social Justice;

The Council will also consist of five members from the transgender community and five experts from nongovernmental organizations.

Imprisonment: These offences will attract imprisonment between six months and two years, and a fine.

The Supreme Court has held that the right to self-identification of gender is part of the right to dignity and autonomy under Article 21 of the Constitution. However, objective criteria may be required to determine one’s gender in order to be eligible for entitlements.

The Bill states that a person recognized as ‘transgender’ would have the right to ‘self-perceived’ gender identity.  However, it does not provide for the enforcement of such a right.  A District Screening Committee would issue a certificate of identity to recognize transgender persons.

The definition of ‘transgender persons’ in the Bill is at variance with the definitions recognized by international bodies and experts in India.

The Bill includes terms like ‘trans-men’, ‘trans-women’, persons with ‘intersex variations’ and ‘gender-queers’ in its definition of transgender persons.  However, these terms have not been defined and could be a major problem.

Certain criminal and personal laws that are currently in force only recognize the genders of ‘man’ and ‘woman’.  It is unclear how such laws would apply to transgender persons who may not identify with either of the two genders.

Read More: What Hinduism, Buddhism, Sikhism and Jainism really think of LGBT people will surprise you