A month back, I happened to chance upon a much-liked picture that kept appearing on my Facebook timeline – a wedding in progress – the bride resplendent in full Bengali get up, sporting vermilion, wearing a rich Benarasi saree, her forehead adorned with delicate sandalwood designs, while the groom wore a traditional headgear (topor) and dhoti.

Very much a couple performing the ceremonies of an elaborate ritual wedding.

Also read: An Exclusive Interview With A Gay Couple From Mumbai

However, what struck me was the gender of the groom. It was a girl. Something in me, moved. In a nation which is homophobic to the core, where lesbians have it much harder than gays, where same sex relationships are solemnised in secret, with some tragically cut short, where women are forced to marry to cure them of their “deviant” sexual orientation and sometimes forced to commit suicide, the couple, Suchandra Das and Sree Mukherjee, have defied all odds, and celebrate their togetherness unabashedly, having tied the knot with much pomp and grandeur. They have made a mockery of gender constructs. The couple live happily in Chennai at present.

This is a love story. This is their story…

“I was attracted to only girls.”

Suchandra: I describe myself as a wife, pet lover, photographer, cinematographer, painter, independent filmmaker and dependent homemaker. I grew up as the elder daughter in a middle class Bengali family in Kolkata and was pampered a lot.

Also read: What Indian Men Want To Know About Lesbians On Quora

I shared a close bond with my grandparents, parents and brother. Ours was a protective and heteronormative atmosphere. There was strict policy against boys. Little did my family know their daughter wasn’t interested in boys!

During adolescence, I found my girl classmates falling for boys. Seeing them, and wanting to be a part of the herd, I tried going out with boys, but found that effort and experience tedious. Quickly, I learnt that I was a little different than girls around me.

Then the crushes started. I realised that I was attracted to only girls. Strangely, I didn’t suffer from any guilt. It was absolutely normal. As if this was meant to be. Throughout my life, I have fallen for girls. There were crushes, little “heartbreaks” and so on. It was only when I saw my life partner, Sree, that I felt my heart thumping for the first time. The rush of blood to my cheeks, the wobble in my knees told me that this was love and I wanted to make it work for the rest of my life. “Anything and everything that happened, any attempt by anyone to come in between, made our relationship stronger.”

Suchandra: I was working with a well known corporate brand as their HR when I met Sree, working then in a real estate company in Kolkata, on Facebook and was instantly attracted to her. We used to chat for hours over phone before we finally met for a very short and life-changing blind vacation.

Initially, I was attracted to her insanely good looks and then when I met her in person, I realised there was more. I knew she was the one. Ours was love at first sight. Shortly after, I moved in with her, quit my job with Sree’s support and began pursuing photography as a profession, which, earlier was a passionate hobby.

Our living together was like an arranged marriage. We knew nothing of each other’s choices and habits. But were willing to learn. Wanted to invest in each other. Till date, we fight like every other couple, but our fights are issue-specific. They never go beyond a day.

“I never regretted falling in love with a person of my own gender. I love waking up beside this woman. Emotional tortures helped us developing an even stronger bond.”

Suchandra: Our marriage was organised at a very close friend’s place. She and her husband did everything. One of our close friends, deeply spiritual in nature, officiated at our marriage. We did all the rituals like a normal couple.

Sree was already in Chennai and I was travelling around for my cinematography projects. Sree was supposed to come and meet me on Christmas eve. One day, I was sitting on my friend’s scooty and going for a meeting and suddenly I pinged Sree and told her I want us to get married that very Christmas.

Sree paused a little and then we planned it with our friends within a fortnight and finally tied the knot. Many of my clients and friends attended our reception. Sree dressed up as the groom and I was decked out like a pure Bengali bride. 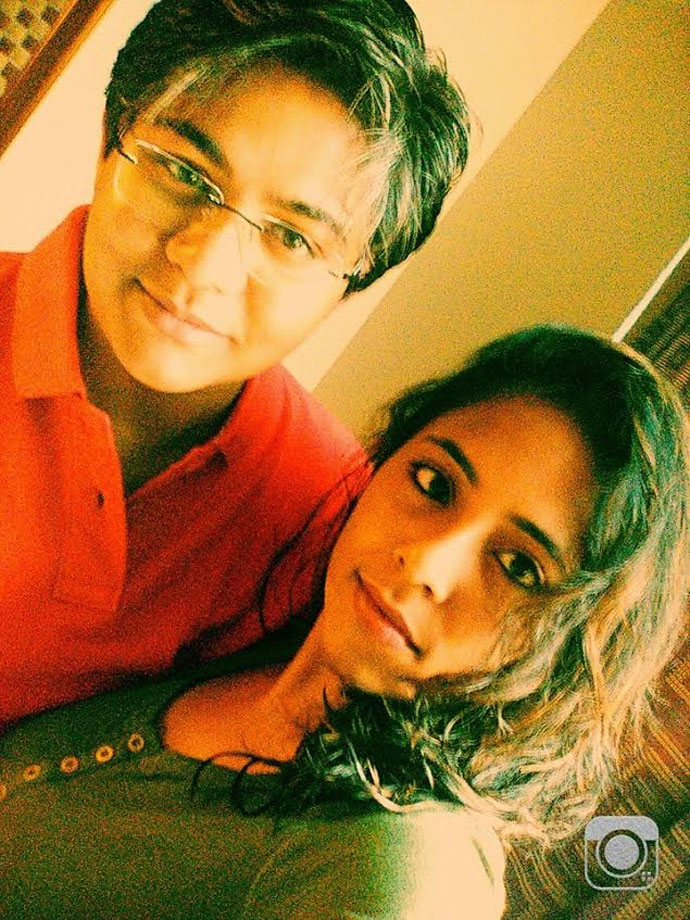 She is comfortable wearing androgynous clothes, and I am a cisgender female. Apparently, we fall into that heteronormative pattern. But our chemistry is much more than what people can comprehend. Sree is a wonderful cook and cooks most of the time for us, we share our load not because of any particular stereotype, but because we care for each other.

It is only love that sets you free. I love waking up beside this woman, watch her drink her coffee in the morning, love to work sitting beside her when she takes a nap or is engrossed in her Kindle, and love that feeling of being whole, of being complete in my love for her. After marriage, the parents of my first-ever client called me up to congratulate.

“Section 377 needs to go. People need to understand it’s not necessarily about homosexual couples. Any form of sex which is not for baby-making (doesn’t include a penis and a vagina) is a punishable offence under this ancient law. So, heterosexual couples too fall under this!”

“It’s much harder for lesbian women. But if you are determined and you know you can’t sleep with a guy, you must make your voice heard. My marriage too was fixed with a guy my parents felt was ideal for me, but the thought of spending my life in a romantic relation with a man was horrifying.”

So I took action. One night, after dinner, I made my dad sit with me and told him I like women and have chosen one for myself. The initial shock and emotional trauma was of course there, but with time, they learnt to handle it.

Read also: Sexuality No Bar- Why Section 377 is Detrimental to All Humans

Today, if any of my relatives or my neighbours try and tell them about me, they shut them up saying I have the right to do whatever I want with my life.

Earlier, people used to ask when am I getting married. These days, they look at my vermilion smeared forehead and ask what does my husband do. Like a proud wife I smile saying, “she” is a marketing head of an engineering company.

Even when I moved into our new apartment in Chennai, we didn’t tell our neighbours the exact relationship we shared. They came to know of it and came to greet us with a giant cake and made us invite them for dinner the following weekend. I don’t think India is homophobic. There are some people who are. The entire country can’t be termed homophobic because of a miniscule section of the society which thinks of itself as the country’s moral guardian.

“A woman can love anyone she wants to be in love with.”

My extended family to whom I was closely attached is perhaps my biggest sacrifice. They severed ties with me. I respected their decision and moved on. I long for kids. But I understand it’s a very big responsibility to raise a child and I would like to wait for the right time. I have just one advice to like-minded people; don’t come out unless you are financially ready. Once you are, it won’t matter what society wants you to do, you can follow your heart.