Although we fail to consider it a serious problem, lack of proper sex education in India affects the lives of a large chunk of our population adversely. Not only does it contribute to rapes and incidences of sexual harassment, it leads to the existence of stigma and lack of awareness and acceptance towards the LGBTQIA community. 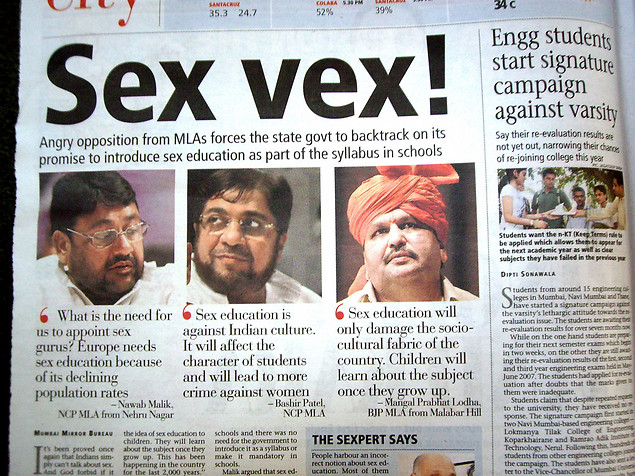 19-year old Soumitri, an engineering student from Bhubaneshwar, Orissa is testimony to the fact that negligence of the need for sex education by our system is a problem that must be addressed.

At the young age of 16, in an encounter initiated by a friend, Soumitri had his first brush with the fact that he was queer.

“We had a moment, and although I quite enjoyed it, I wasn’t sure if it the way I felt was right. I had a nagging feeling that it was wrong and I was highly confused. I guess I was just experimenting back then. But slowly and gradually I came to the conclusion that this was normal and I wasn’t doing any wrong.”

The confusion wasn’t the only thing Soumitri had to battle though. Even after three years of knowing about his sexuality, he still isn’t out to his family and friends, for fear of them refusing to accept him.

“Only a few of my close friends know about it and they have been extremely supportive. My roommate in college even gives me advice on what to wear and how I’m looking when I’m getting ready for a date. I owe a lot to these people”, he says.

When asked whether his parents would ever accept his alternate sexuality, he says he highly doubts it.

“This morning, I was watching a dating show on TLC that featured two guys going on a date. My father happened to walk in and his first reaction was to say how gross and displeasing it was. We got into a serious argument and I realised that no matter what, he is never going to accept me.”

Growing up, he remembers being bullied and harassed by peers in school because he “behaved like a girl”.

“There was a lot of bullying, name-calling in school but I chose not to let it affect me. I thought if I let it get to me, it would prove I was weak. The bullying has still continued in college, but again, I do not let it affect me.”

Soumitri attributes this hostility towards the LGBTQIA community to the absence of adequate sex education in Indian schools.

“That’s the biggest challenge the LGTBQIA community faces in India today. People in our country do not have the knowledge or awareness that would enable them to accept others regardless of how different they are from them. What they need to be taught is that it is completely normal and it can happen to anyone.”

Having spoken in detail about the need for sex education, Soumitri ends with his views on the infamous Section 377.

“It’s stupid. It should be all about free will. Considering this is the 21st century, people should get to choose what they do in a relationship. If it isn’t your relationship, then it doesn’t even matter”