I have come to realise that in our country, it does not take much for a celebrity to receive unwarranted flak. Just trying to live your life in the best way possible is enough to do the trick sometimes.

I say this in light of the recent public reaction towards eminent filmmaker Karan Johar fathering twins born to a surrogate mother. As soon as news broke out about the registration of the twins’ birth with Johar being named as the father, speculations and curiosity got the best of everyone.

Soon enough, the man himself released a statement saying, “This was an emotional, yet well thought out decision which I have taken after considering all the responsibilities and duties that come with being a parent. In order to arrive at this decision, I have prepared myself mentally, physically, emotionally and logistically to ensure that my children get all the unconditional love, care and attention from me and mine.” 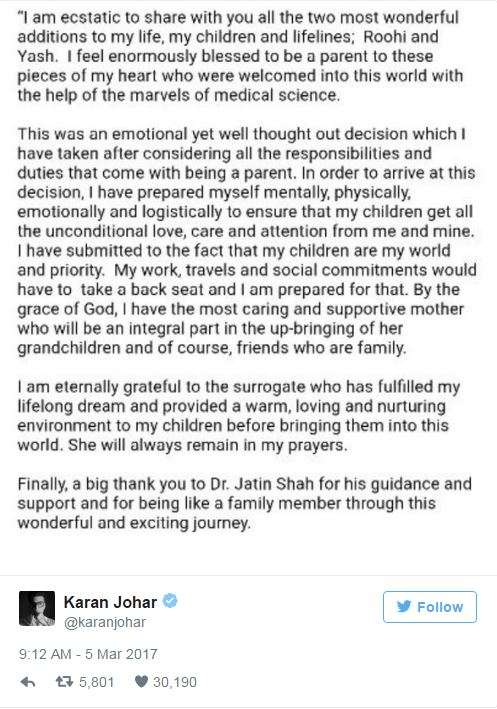 While the above statement shows the maturity with which Johar chose to talk about his decision, most people on the Internet chose not to exhibit even the slightest maturity when it came to hating on him for living his life, in a way similar to how his sexuality has always been addressed.

While several people, including actor Shah Rukh Khan, reacted with joy and respect for the decision, most others have not been so kind.

In what is possibly the most insensitive reaction, Samjwadi Party Leader Abu Azmi questioned the action and asked why Karan couldn’t simply find a suitable girl and get married. He went on to say that it seemed as if he was mocking the poor by choosing “the drama of surrogacy” over adopting children.

Several Twitter users made insensitive and ignorant remarks going so far as to saying that Johar “bought his babies” because he couldn’t make one.

Tweets such as “Don’t bring your children up to be gays” and even transphobic remarks such as “I thought Karan Johar would be a mother someday but now he’s a father” were enough to show the backward state of mind with which India still suffers.

In late 2016, the Government approved a bill that came as a big blow for same sex couples looking to have a family. The bill banned unmarried couples from opting for surrogacy and received serious flak from around the country. Just when I was beginning to think that the bill had not done serious damage after reading about Johar opting for surrogacy, I realised that we, as a country, are still stuck in an ancient era with regressive beliefs and a state of mind that is affected adversely by the fact that others are living their life.

When it comes to showing solidarity towards the LGBTQIA community and respecting their right to a fulfilling life, we still have a long way to go, and this incident proves it like no other.