Activists trying to open Uganda’s first centre for lesbian, gay, bisexual and transgender people received intimation that their plans for a safe space are illegal.

Simon Lokodo, minister for ethics and integrity, said opening the community centre would be a criminal act.

“They will have to take it somewhere else. They can’t open a centre of LGBT activity here. Homosexuality is not allowed and completely unacceptable in Uganda,” he said. “We don’t and can’t allow it. Uganda has criminalised and banned all LGBT activities already. So popularising it is only committing a crime.”

But fundraising is continuing, according to campaigners crowdfunding to build and open an advice and arts centre in the capital, Kampala, by the end of the year.

“Queer people live in fear of arrest or getting beaten up or killed. There is no safe space. This is why my team want to open Uganda’s first LGBT community centre,” said Petter Wallenberg, director of the group Rainbow Riots. 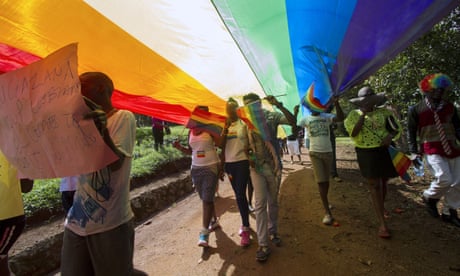 Opinions Rallying For The Centre

“The centre will be a safe space to welcome queer people, encourage and support them. To achieve this, we are currently raising funds to cover the costs.

“We will provide opportunities to learn, relax, socialise and will also give advice on health and safety, which is much needed. It will in essence be a support system.”

Alicia Houston, 22, a campaigner and HIV-positive transgender woman in Kampala, a space for a “vulnerable community” regularly confronted with violence and discrimination underlines this need. “It will also be a creative space that will cater for many who don’t have other chances to express themselves elsewhere,” she said.

Homosexuality is illegal in Uganda under colonial laws. In 2014, an attempt to make some homosexual acts punishable by death was narrowly avoided when it was ruled unconstitutional.

Neela Ghoshal, of Human Rights Watch, said such a centre was crucial.

“But, in what has become a familiar pattern, minister Lokodo is far overstepping his mandate by trying to block the proposed centre, in blatant violation of the right to freedom of association,” she said.

Activists believe the arts can help to address transphobia and homophobia in the east African nation. Kowa Tigs, a member of Rainbow Riots, said: “In Uganda anyone can humiliate you, embarrass you. They can chase you from your house, school or even home. There is just nothing you can do about it. Resentment and hatred towards LGBTI people exists considering them evil and un-African.

“Team members drop out because of fear of exposure. But if we don’t speak out, then who will? Someone has to take a front seat.”