It is time to pivot the plus. The very symbol that has served as an anachronistic additive for the LGBTQIA community has woefully subtracted. The very “+” that has elucidated the “freedom” that comes along with identifying as LGBTQIA has heretofore restricted. That is, the very image of the “+” has not invited intersectionality into the conversation but invalidated identities. It has not opened up the circle or made room at the table for non-homonormative subjectivities. It has only served to link identities like a ball and chain back to the very sociocultural construct of whiteness. Without a quick rotation of the “+”, the very rainbow revealed in the sky by LGBTQIA, according to Alok Vaid-Menon, will only continue to refract white light.

Also Read: Anwesh Sahoo- ‘Being Gay In India Isn’t Half As Bad’

Alok Vaid-Menon, a trans South-Asian activist, said that “the mainstream LGBTQIA+ movement is really not a movement at all, it is a marketing scheme so that white wealthy people could position themselves as victims of various systems that they are upholding.

“As white cis gay rainbow-loving men march forth in lockstep agreement through struggle towards “liberation,” “freedom”, or even the Academy, color quickly fades into the background. As a result, same-sex desiring subjects of color are not only pushed to the margins of the margins in media, but they are also often relegated to the realm of impossibility in our own “reality”–“There are no queers in India. Can you pass the bread?” becomes the topic of conversation at the table from which queer folx of color have historically been excluded from.

Let’s get one thing “straight.” There is and there are and there always has been and there always will be queer brown folx. But when thinking about origins and homelands of queerness in India and abroad, a (re)turn to historical fictions is often made in order to locate our specific identities and self-representations–x marks the spot. A fabricated past furnishes and informs our present “reality”.

Also Read: The Invention Of Heterosexuality

According to openly gay psychotherapist Deepak Kashyap, “people go as far back in history and wide in geography as it serves their argument.” 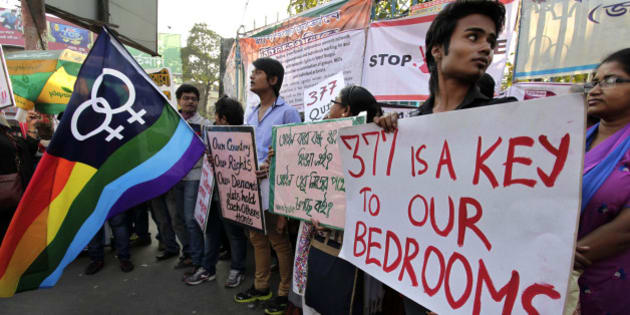 For example, Section 377 in India, a vestige of the Victorian era, and the Stonewall Riots in the U.S. are often cited as the origins of the gay rights movement, but both too often become heuristics used to index identities and undergird stories that end up reinforcing instead of reinventing received master narratives of whiteness. Both are used to recapitulate the homogenizing tendencies of history. We know only as much as we are told, and those who tell us are, according to Alex-quan Pham, a Vietnamese femme, “the imperialist, capitalist, white supremacist cisheteropatriarchy.”

What I think we need then is a move away from the “+” that flattens the potential to see the plurality of the LGBTQIA community and a move towards an “x” that embraces intersectional identities (see below).

The positive aspects of the + (plus) have up until now actually proved to be negative – (minus). By adding on to the ever extending arm of the LGBTQIA(+) acronym, we fail to see how that appendage has actually pushed away and pressed down lgbtq folx of color. By pivoting the plus we don’t just operate an amputation, but add space rather for a ball and socket (not ball and chain) to allow for more “movement” and “direction” in the community. By pivoting the plus, we begin embracing the intersectional vectors that make us who we are. We move away from the imperative of saying “I am exactly this” and start laying claim to the interrogative of asking ourselves “who else can we become?”

Also Read: Model Detained at Dubai Airport for ‘Being Trans’

By amputating the symbolic additive we also gain a more flexible perspective to see how at the forefront of the gay rights movement were not out and proud white cis gay men, but folx of color who were systematically made to inhabit the background. Thus, by pivoting the plus or turning the t we don’t just begin to see how queers lives are lived amid whiteness, but we begin to see how those same lives are lived against whiteness and how whiteness in turn informs critical queer positions. The quick switch sheds (white) light on the social injustices of those who were hxstorically left out.

Also Read: A Conversation with Samir Narang- A Drag Queen with an MD

While a nod to quare studies (i.e., a formulation of queer theory with attention given to race and class) is a move in the right direction, a certain attention also needs to be given to the acronym that enunciates subject formation and calls identities into existence. While quare studies quares queers theory, it’s about damn time we quare the same cue (+) that has left certain bodies out of our collective imagination. All it takes is a quick swivel of a sign to change the trajectory of the LGBTQIA(plus) paradigm.

By doing so, what one then finds at the end of the LGBTQIA rainbow is neither a plus (+) nor an illusory pot of gold, but a real radical rainbow-colored X.